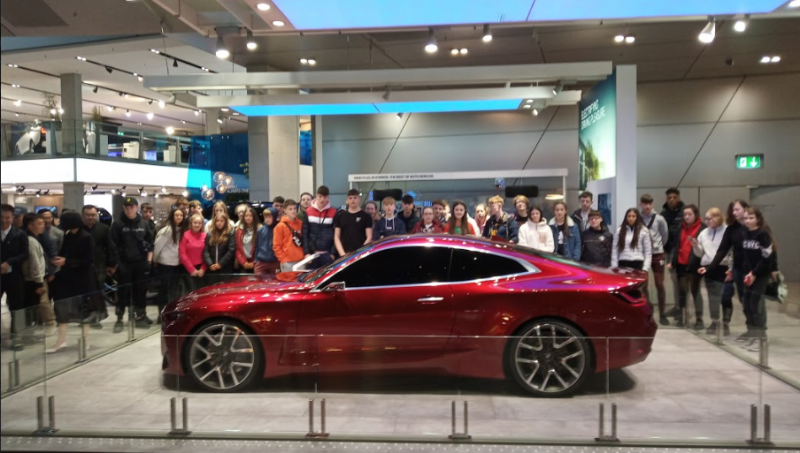 42 Killina 3rd year students had a midterm with a difference this year as they embarked on the foreign trip to Munich late Thursday night, the 25th October.  Leaving the school and the Tullamore Court at 2 a.m proved challenging for some, as they got ready to fly out at 7 a.m. On arrival in Munich, there was a summer feel in the air as the sun shone, and the first port of call was the Allianz Arena tour, the home of Bayern Munich.

Next up was a trip to the Deutsches Museum of Science and Technology- 6 levels charting the history of technological, nautical, engineering and scientific discovery from the simplest of implements to the latest in cutting-edge developments.

After settling into the hotel and getting rooms sorted, it was time for a trip into town- using trams and the underground proved quite the adventure for some students- but thankfully there were no mishaps or missed stops: although a case of mistaken identity did see one or two heading off in the wrong direction, temporarily!

Saturday saw an early start as the group departed for Salzburg, where they first visited the Berchtesgaden Salt Mines.  An amazing digital lightshow illustrated the formation of salt, and the excellent guide, George, talked the group through the history of the mines.  Now and again an Irish accent could be detected- afterwards, he revealed his mother was from Dublin! After the Salt Mines, there was time to explore the city of Salzburg with its beautiful old buildings- the famous Cathedral in Salzburg has a statue of a Laoisman, Vergilus (Fergal), who was Bishop of Salzburg during the 8th century.  Then it was on to Hellebrun Castle and the trick fountains, which were highly entertaining or highly irritating, depending on where you were positioned! A busy day was rounded off with a trip to the Olympic Tower that night, which commanded a spectacular view of Munich after dark. 180 meters up in less than 30 seconds made a few ears pop!

Sunday began with a trip to Neuschwanstein Castle, the inspiration behind the famed Disney Castle.  Next was a cable car ride to the Zugspitze, the highest mountain in the German Alps. Another cable car brought the group to the glacier, where great fun was had between snowballs and tobogganing down the slopes.  The night activity was bowling- some very impressive scores, but others maybe better advised to stick to the sliotar or the O’Neills size 5!

The last full day began on a sombre note with a trip to Dachau Concentration Camp.  It has to be pointed out here that the guides are absolutely fantastic: while the core information is the same in every language, each guide always provides insights and stories based on their own research and perspective- always a very moving experience.  There was a complete change of tone in the afternoon when the group went to the Galaxy Erding Water Park; a vast complex with an array of swimming pools and 27 slides.

Tuesday began with a trip to BMW Welt, with a stunning display of the best of the car and motorbike brand, as well as a history and evolution of the manufacturing of airplanes, motor bikes and cars.  Then it was time for one last run around Marienplatz, the main square, for the obligatory shopping, before heading to the airport for home.

Thanks to Ms Mann for organising and coordinating the packed itinerary and ensuring everything ran like clockwork, and to the other teachers who travelled with the group.  And a sincere well done to all students who travelled- they were a credit to themselves, their families and their school, as their manners and exemplary behavior was noted by guides and staff at all the facilities they visited.  The advice for current 2nd and 1st year students would be to take note, and maybe start planning ahead for next year or the year after, in order to participate in a once in a lifetime experience.